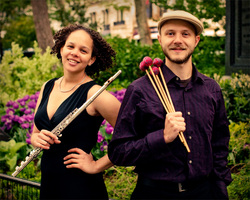 Photo credit: Sarah Tew
justmusic was formed in a Brooklyn basement in 2009. Cesare Papetti (percussion) has toured across Europe and is known as an excellent improviser, innovator, and educator. The ensemble rests on the idea that music is at its core fun, and not to worry, because it's just music.