"Alice Jones, beast of a flute player... is a total gem: she comes to rehearsals with excellent knowledge and analyses of the works, and helps create beautiful interpretations of the music we present on our programs. She's literally down for just about anything as well—looking for a sound? I bet you she can make it on one of those flutes! She's a total team player, and we couldn't be happier to get to work with her... [H]ear her ROAR!"
-Whitney George, composer and director of The Curiosity Cabinet 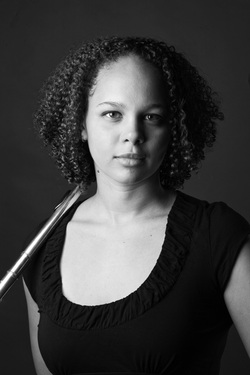 Photo credit: Sarah Tew
Raised in Austin, TX, Alice Jones is a musician whose multi-faceted career welcomes new listeners into the world of music. As a flutist, composer, teacher, and administrator, she pushes against the boundaries of what it means to be a musician, whose voices can be heard, and what success looks like. In 2020, she became the Assistant Dean of Community Engagement and Career Services at the Juilliard School, drawing upon her commitment to music creation, education, and collaboration.

An avid symphonic, chamber, theater, and contemporary performer, Alice was praised by Mario Davidovsky as “the flute player who could really play” and Fanfare Magazine called her 2017 album with Ensemble 365 “pretty music faultless... required listening.” Her performances have been described as “lively” (New York Times), “superb” (Carole Farley, soprano), and “delicate and passionate with beautiful articulation and dynamics” (Eleanor Cory, composer). She has been a featured soloist and chamber musician at the Look and Listen Festival, Composers Now Festival, the Yale-China Music Exchange in China, the Norfolk Chamber Music Festival, and Chamber Music Campania (Italy). She is a former member of the woodwind quintet Fiati Five, which toured Italy for four seasons, and the New York-based collective The Curiosity Cabinet, whose interdisciplinary performances feature 20th and 21st century music combined with film, puppeteers, dance, narration, and acting.

Alice’s chamber music arrangements and compositions have been performed by the Phoenix Orchestra (Boston), University of New Mexico horn studio, and Lucera Vocal Institute (Italy). In 2020, she launched #tinyefforts2020, inviting performances of four open instrumentation solos she composed that summer through social media platforms, sharing the scores for free and paying any performer who participated. In the first month the scores were available, the pieces were performed around the world by 19 musicians. Other commissions in 2020 include a set of concert etudes for trombonist William Lang and a chamber work for soprano, horn, and piano for Amity Trio.

Alice received the Brookshire award for musicological research and writing at SUNY Purchase (2006), the Associated Music Teachers League Award for instruction at CUNY Queens (2003), an Enhanced Chancellor’s Fellowship at the CUNY Graduate Center (2009-14), and the Graduate Research Award from the National Flute Association (2016). In 2018, she was named to the New York City Department of Cultural Affairs inaugural Leadership Accelerator cohort, a group of dynamic cultural leaders from traditionally underrepresented groups. She is a skilled fundraiser and strategic arts administrator, having led the Development Department at the Brooklyn Conservatory of Music for four years. She also designed and curated three seasons of Parlour Room Sessions, an audience engagement-driven chamber music series which featured female and BIPOC musicians on stage in nearly every performance.

As a classroom and studio teacher, Alice engages students of all ages in myriad educational settings. Her research and pedagogical interests focus on the intersection between aesthetics and music cognition: the place where listener, performer, and composer meet. She has taught music appreciation, ethnomusicology, musicianship, entrepreneurship, community building, and pedagogical practices at several universities and preparatory programs. She also teaches flute and community building in Juilliard’s Music Advancement Program, teaches flute and conducts the wind ensemble at UpBeat (an El Sistema program in the Bronx), and maintains a private studio in New York. She previously served on the music faculties at the Aaron Copland School of Music at CUNY Queens College, CUNY Queensborough Community College, CUNY Borough of Manhattan Community College, and SUNY Purchase College.

Alice lives in Brooklyn, NY. When she's not musicking, she’s likely walking her dog or making ice cream. She is a Haynes artist.

No longer "news," but still noteworthy

Summer 2020 would have been my first season as the senior session flute faculty at Luzerne Music Center. I look forward to excellent music making, learning, and inspiration there next year!

In September 2019, I joined the faculty at UpBeat, an after school El Sistema music program in the Bronx, teaching flute and conducting the new wind ensemble.

Ensemble 365's album Eastern Currents has been named a National Honorable Mention Finalist for The American Prize for Chamber Music Performance in 2018-19.

I've joined the faculty of the Music & Art department at CUNY Borough of Manhattan Community College and the flute faculty of Juilliard's Music Advancement Program in Fall 2018 -- I'm thrilled to be working with so many new, talented, and inspiring students from so many walks of life.

I was a member of the inaugural CreateNYC Leadership Accelerator cohort for New York City cultural workers in June 2018.

I joined the faculty at SUNY Purchase in August 2016.

I won the National Flute Association's Graduate Research Competition and presented my dissertation research at the annual convention in San Diego in August 2016.

I joined the music faculty at CUNY Queensborough Community College  in January 2016.

I was the student speaker at the CUNY Graduate Center's 51st Annual Commencement on May 27, 2015, in Avery Fisher Hall at Lincoln Center.  The text of my speech is available here.